Pointe de l’Espiguette  is reported to be extending to the W by about 15m a year. Depths of 5m have been reported to lie up to about 1 mile offshore in this vicinity, and this part of the coast should be given a wide berth. Les Baronnets, 10m high, is a chain of prominent sand dunes which extends along the coast near Pointe de l’Espiguette. A light is shown from a square masonry tower with a black top, 25m high, next to a house with a red roof standing on the point. An old signal station tower is situated close NW of the light with a pylon standing close to it.
Lighted buoys, which mark the edge of the coastal shoal bank, are moored about 1.5 miles W and 1.5 miles S of the light.

Between Pointe de L’Espiguette and the Golfe de Fos, 33 miles E, the shore is very low. It is bordered by lagoons and has very few landmarks. It is reported that the radar images of Cap Couronne (43°20'N., 5°03'E.) is the E entrance point of the gulf. A light is shown from a structure, 29m high, standing on the cape. A prominent signal station stands on a hill, 0.5 mile N of the cape. The breakwaters and many canals are more distinct than the outline of the shore itself.
Numerous dangerous wrecks lie off this stretch of the coast and may best be seen on the chart. 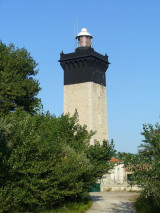