Dover Strait , 18 miles wide at its narrowest part, separates the SE coast of England from the N coast of France. This stretch of water contains a number of dangerous banks, which are composed of coarse sand and broken shells. These shoal banks, which are comparatively narrow, extend NE to SW in mid-channel and hinder navigation.
Persistent strong winds produce the wind driven currents which may approach or exceed the rate of tidal currents.  Persistent W or SW gales can produce an observed overall movement as much as 1.5 knots through Dover Strait.

The Varne (50°58'N., 1°20'E.), a dangerous steep-to and narrow shoal, lies 11 miles NW of Cap Griz-Nez and extends for about 8 miles in the middle of the traffic lane heading SW in the Pas de Calais TSS. It is possible to pass on both sides of the bank. Strong tide rips occur in the vicinity of this shoal and a heavy sea breaks over it during bad weather. This shoal has a least depth of about 3m and is marked by lighted buoys to the W, E, and S.

The Ridge (Le Colbart) (50°53'N., 1°20'E.), a dangerous steep-to and narrow shoal, lies about 10 miles W of Cap Gris-Nez. It extends for about 10 miles and forms a natural separation between the traffic lanes of the TSS. This shoal, which is composed mostly of sand with mud and shells in places, has a least depth of 1.5m and is marked by lighted buoys. The sea breaks heavily on this shoal, especially with the wind against the tidal current.

Bullock Bank (50°45'N., 1°05'E.), a steep-to and narrow shoal, lies about 20 miles WSW of Cap Gris-Nez. It extends for about 7 miles and is marked by a lighted buoy. This bank has a least depth of 14m and is usually marked by strong tidal rips.

Les Ridens (50°45'N., 1°18'E.), lying about 13 miles SW of Cap Gris-Nez, is an area consisting of several shoals. These shoals are formed of sand, gravel, and shells disposed irregularly on a rocky bottom. The area has a least depth of 13m and is marked by a lighted buoy. The sea breaks heavily on this area and strong eddies occur in bad weather.

Bassurelle (50°38'N., 1°05'E.), a sandy shoal with a least depth of about 7m, lies 24 miles SW of Cap Gris-Nez. Strong eddies and a dangerous sea occur during bad weather, especially with the wind against the tidal current, in the vicinity of this shoal. The shoal extends for about 9 miles and the depths over it frequently change.

Vergoyer (50°33'N., 1°15'E.), a narrow sand bank, lies 23 miles SSW of Cap Griz-Nez. It extends for about 15 miles and is marked by lighted buoys. A shoal patch, with a least depth of 4.2m, lies near the NE extremity. The E side of this sand bank is steep-to, while the W side slopes gradually. In bad weather the sea breaks over this bank.

Bassure de Baas (50°27'N., 1°20'E.), a narrow bank of sand and shells, lies with its N end located about 4.5 miles SSW of Cap Griz-Nez. This bank has mostly depths of less than 7m and extends for about 35 miles. During bad weather the sea breaks heavily over the entire bank. Numerous unmarked wrecks lie in the channel leading between the mainland coast and the N part of Bassure de Baas.

Battur, a shoal extending for about 9 miles, lies parallel with and SE of the SW extremity of Bassure de Baas. It has a least depth of 8.9m and is formed of sand, gravel, and shells. During strong W winds the sea breaks heavily on this shoal. 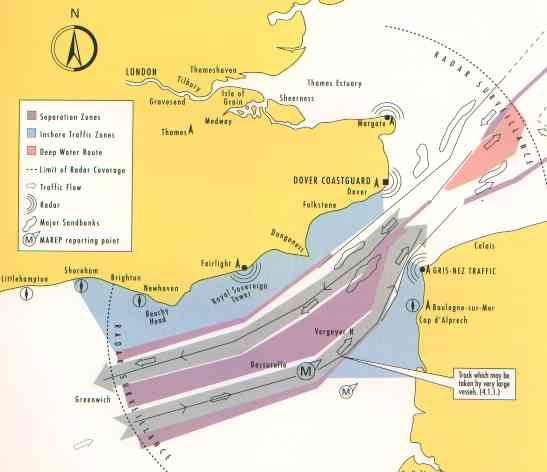 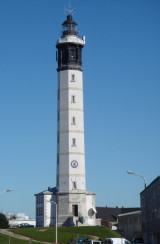