In a south wind, however, this south-facing anchorage is unappealing. 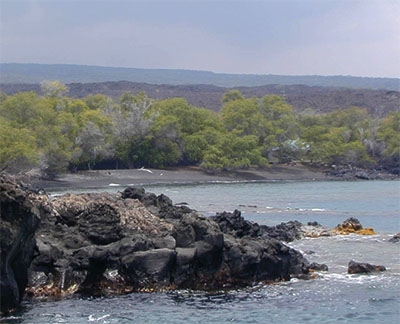 16nm
359°
It South of Kealakechua bay. The major attrction is the historic Pu'uhonua O Honaunau, the city of refuge, wich looks much as it did hundreds of years ago.Beautiful Honaunau Bay is fronted by large, smooth, lava rock flats. Near shore the average depth is only about 10 feet.
Anchor ...
14 Dec 15
Joëlle

24nm
353°
This small but secure bay, 5 miles S of Kailua, is a favorite among Kona sailors.Good protection from all but W winds.

29nm
350°
The harbor is  located in Kailua Bay in Kailua-Kona.
The bay where you can anchor is known to local sailors as Nishihimura bay. Five and a half miles S of Upolu Point you'll see a small cove with manmade rock wall on the N face of the cliff. This wall was built for the ralroad ...
13 Dec 15
Joëlle

53nm
5°
Kawaihae is a small port town along Big Island's northwestern Kohala Coast. During the 19th century, Kawaihae was a busy whaling and trading port. Historically, Kawaihae Harbor was also the place where the ship that brought the first horses and cattle to Hawaii docked. During the ...
14 Dec 15
Joëlle

61nm
0°
Located on the North West tip of Hawaii on the North Kohala Coast. The harbor is identified by the lighthouse on a point just south of the anchorage and by a few houses and warehouses that are easyly visible from the water.Anchor in sand , in 30 to 40 feet of water.Mahukona is an ...
13 Dec 15
Joëlle