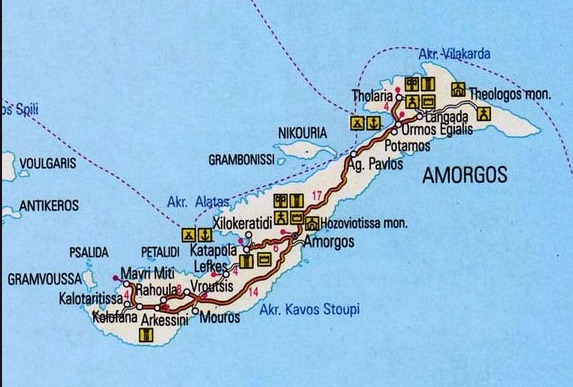 Katapola
Port Katapola on the left (South side) of the bay.
2017-08-23
Actualizar
Anonymous 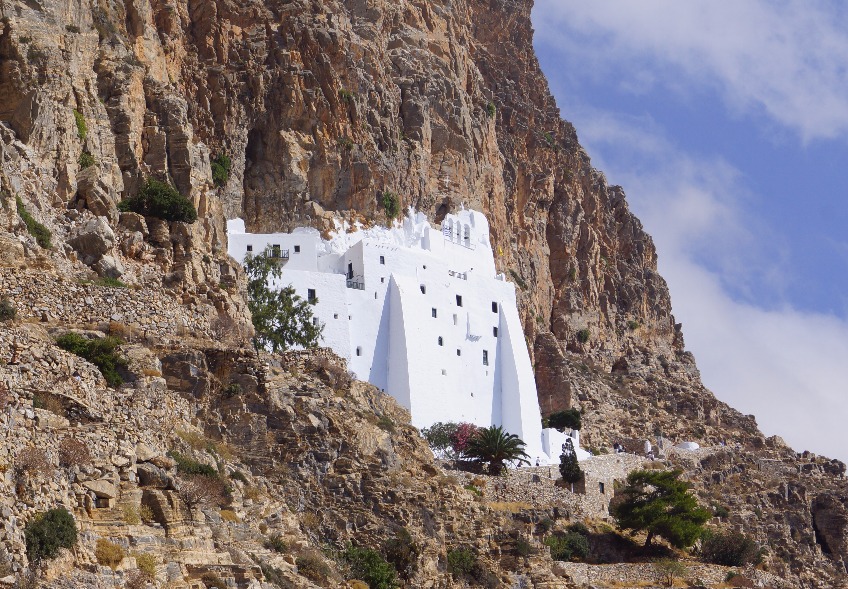 Nisos Amorgos is the most eastern island of the Cyclades, except for the small Kinaros and Levitha islands. It is mountainous with many cliffs (especially NE and S where they plunge abruptly, 300 m high, into the sea). Amorgos is a mountainous island famous for the monastery of the Panaghia Chozoviotissa which is perched above a precipice of 300 m altitude.
Amorgos has an area of ​​121 km² for 112 km of circumference. It is located 138 nautical miles from Piraeus. It has two ports Órmos Aighiális (or Aighiali) in the north and on its west coast: Katapola in the center. The first, more animated and touristy, is located at the start of numerous hiking trails criss-crossing the North of the island, and also has the advantage of offering a large and beautiful sandy beach, a rare thing on the island d ' Amorgos.
The port of Katapola, more calm and authentic, especially on its northern side, offers the typical image of a small fishing port not devoid of a certain activity. Dominating the bay, the remains of a residence of King Minos, from where the view on the islands around is simply breathtaking ...
A few kilometers from Katapola lies the village of Chora, the capital of the island, one of the most beautiful villages of the Cyclades, crowned with a Venetian Kastro and numerous windmills.
It is not by chance that the island was chosen as one of the locations of the film "the big blue". Its magnificent and particularly preserved coastlines offer the spectacle of high cliffs plunging into translucent blue waters. However, the large beaches are rather rare on this mountainous island which offers the visitor its rocky coves with limpid waters, its splendid villages with the preserved traditions, and especially the visit of its incomparable monastery
The southern part of the island is the most authentic and preserved. It is a rural area and its villages have had little or no impact on tourism. The beaches of Mouros and Amoudi, although difficult to access, (especially the 2nd) are definitely worth a visit for their deep and incredibly clear waters. Before reaching the beach of Kalotaritissa, we see on the right the wreck having served as decoration in "the big blue".
Amorgos is an ideal island for hiking as its many paths allow to reach totally virgin areas. Among the most beautiful walks, the sublime path along the ridges between the impressive monastery and the village of Potamos. A small day is necessary to make this trip, especially if you make a detour through the splendid and deserted beach of Chalara. Another memorable walk on this island with a particularly generous trail network will allow you to reach the charming chapel of Stavros from the village of Langada. This particularly impressive route, not recommended for people prone to dizziness, will take you to one of the wildest corners of the island.
Culinary specialty: "fava", dried yellow pea seeds, cooked in water and served in warm purée watered with a drizzle of olive oil.
Fishing around the island is excellent and you can often see a dolphin bench nearby.
By Meltem, there are strong gusts to the S of Amorgos as well as a sea formed at the NW and SE.
2017/09/6
Actualizar
Joëlle
Comparta sus comentarios o fotos en "Nisos Amorgos (Greece)"