Keehi lagoon is a great place for canoeing and boating since the waters are usually calm in the protected lagoon.Many canoe clubs do their practice session here and outrigger canoe regattas take place from time to time. However, the man-made beach is not suitable for swimming, snorkeling or surfing.

There are three marinas here in Keehi lagoon, Keehi Small Boat Harbor is (mis)managed by the state. It is in a sad state of disrepair, at least a quarter of the docks are gone, have long since floated away, with only some concrete pilngs remaining. Security is non-existent, and there is a fair bit of crime, vandalism, car-stealing, drug dealing, etc. The harbor also has a large number of mooring balls in the lagoon, which used to be an anchorage. Although living aboard is not allowed, there are at least several dozen liveaboards out there - every once in a great while they will do a "raid" and kick people off their boats, but everybodys back in a couple of weeks. I was a liveaboard out there for about 5 months til I got a slip in one of the private marinas. Thought the mooring balls were preferable to the docks - more peaceful and secure, and bought a kayak to get to shore since outboards tend to walk away there and anything that needs to be rowed appaerantle doesn't appeal to the thieves.
In addition to all that, Keehi is right at the end of Honolulu international's runways, so there's a constant stream of jets overhead, including Aloha Airlines' ancient and very noisy 737's and a few F15's now and then. Also a lot of noise and dirt coming from the concrete recyling plant, likewise, the marinas are all on Sand Island Access rd. where ever bit of ocean freight coming into the entire state rolls down the road on trucks. All the trucks, and most of the planes don't run at night though, and its a lot more peaceful. 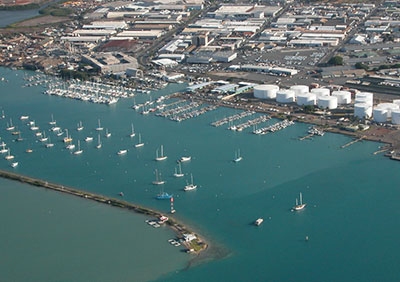 3.3nm
124°
Ala Wai Yacht Harbor is the largestyacht harbor in the state of Hawaii. Located at the mouth of the Ala Wai Canal, between world famous Waikiki and Honolulu, the Capitalof Hawaii.
The harbor is home to the Waikiki Yacht Club and the Hawaii YachtClub, which host junior sailing ...
7 Dec 15
Joëlle

11nm
14°
This bay is on the north east coast of Oahu and is protected by the Mokapu Peninsula.
This bay is very calm and sheltered. Together with the crystal clear water, it makes a very attractive anchorage. There are four marinas here as well as four anchorage areas. Anchor in the North ...
9 Dec 15
Joëlle

12nm
272°
This is the only "real" marina in Hawaii. It has: floating docks a fuel dock laundry showers gas barbecues easy access to swimming lagoons The marina listens on VHF 71 and likes to clear traffic in and out as there is very little manoeuvering room in the chanel. Commercial traffic ...
7 Dec 15
Joëlle