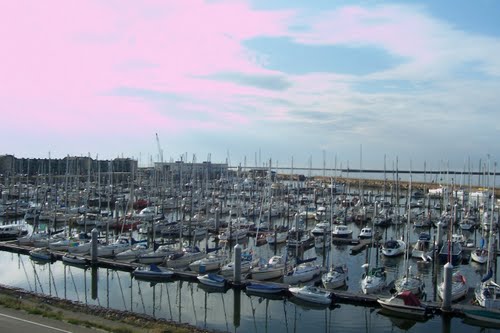 19nm
90°
Marken is a peninsula alongside the picturesque Markermeer, the South part of the Ijsselmeer, Marken is well-known for its characteristic wooden houses.
Former island, which nowadays is connected to the North Holland mainland by a causeway.
A really nice place to visit
31 Dec 07

21nm
89°
The lighthouse on the Peninsula of Marken on the IJsselmeer.
The present lighthouse was built in 1839 and was declared a national monument in 1970. When on a sailing trip at the IJsselmeer, Marken is definitely worth a stop.
14 Jun 11
jack

24nm
207°
- Your comments are welcome - If you would like to add your own report on a marina, harbour, beach or anchorage please click on the "Edit" tab above, delete this text and type your comments. Digital photos are also very welcome using the "photo" link in the left menu. - Regards - The Webmaster
1 Jan 08

21nm
59°
Founded in 1357, Hoorn become a major harbour town. During Holland's 'Golden Century', Hoorn was an important home base for the Dutch East India Company. In 1616, the explorer Willem Corneliszoon Schouten bravedstorms as he rounded the southernmost tip of America. He named it Kaap ...
31 Dec 07