Christ of the Abyss (Key Largo) 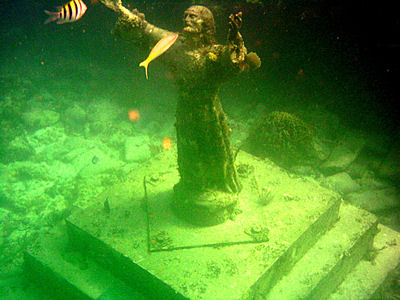 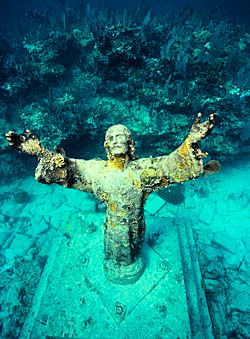 Christ of the Abyss is a 8 1/2 foot, 4,000 pound bronze sculpture of
Jesus Christ that stands in 25 feet of water off of Key Largo, Florida.
It is located near Dry Rocks, about six miles east-northeast of the Key
Largo Cut, in the John Pennekamp Coral Reef State Park.
This reef is a very shallow dome shaped reef which breaks the surface at low tide on the landward side, and slopes to 25 feet on the seaward side. The statue is one of three cast from a mold by an Italian sculptor
Guido Galletti. It was originally made for Egidi Cressi, the dive equipment manufacturer and later donated to John Pennekamp Coral Reef
State Park in 1966.

The original "Il Christo Degli Abissi" statue was placed in the
Mediterranean Sea off Portofino, Italy, in 1954. In 1961, a second statue
"Christ of the Deep" was cast from the same mold. The Cressi family of
Italy donated the statue to the Underwater Society of America, which in turn donated it to the Florida State Park Service, in recognition of the conservation efforts involved in the creation of America's first underwater park.
The Christ Statue is one of the most famous and visited underwater sites on earth, accessible to divers and snorkelers alike! Shallow high profile spur and groove coral formations are surrounded by relatively flat, coral and sponge encrusted hard bottom, and sand. Large Spotted
Eagle Rays and Southern Stingrays are often sighted near the sandy perimeter.