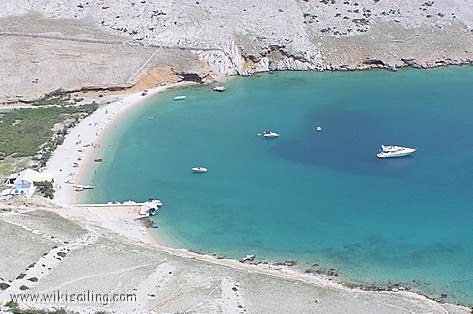 Deep bay SE of Krk, between Rt Rebica and Rt Sokol.
Anchor to the bottom by 5m.
Protected from the Bora, but exposed to the Sirocco.
2011/08/2
Update
Jojo

8.2nm
188°
Rapski Kanal is deep and leads between Otok Sveti Grgur and Otok Rab.
This channel is seldom used as the fairway is only 0.3 mile wide in places and several rocky patches lie adjacent to its S side.
4 Aug 11
Jojo

11nm
264°
Otok Plavnik lies with Rt Veli Pin, its N extremity, located 0.7 mile E of the E side of Otok Cres and divides Srednja Vrata in its S part into two channels.
This cliffy island is 194m high and partly wooded.
Several small islets lie on a shoal bank which extends about 1.5 miles ...
4 Aug 11
Jojo

35nm
181°
Otok Olib is located E of O. Silba. It belongs to Zadar archipelago.The island has been inhabited since Roman times. The residents bought their island in 1900. The only village on the island was established around the port.
To the east of the island you will find some small hidden ...
27 Jul 11
Jojo

35nm
184°
Olipski Kanal leads NNW between the E side of Otok Silba and the W side of Otok Olib and merges into the N end of Pohlipski Kanal.
This channel is deep and has a minimum navigable width of 0.7 mile. It is often used by vessels proceeding to and from Zadar.
Good anchorage is ...
18 Sep 11
Jojo

11nm
264°
Kanal Krusija leads to the W of Otok Plavnik.
This channel is frequented because of its steep-to shores and deep passage.
A strong current may occasionally be experienced in this channel, depending on local weather conditions, but this passage is recommended over the one leading ...
4 Aug 11
Jojo