The tidal currents off Sawai Bay set NE on the flood tide.

An observation spot lies on a small promontory that extends WNW from the coast about 1 mile S of Keating Point. Keating Point Light is shown from a round metal tower on the point; a racon and a radio beacon transmit from the tower.

Anchorage can be taken, in a depth of 21.9m, rock and coral over a thin layer of sand, about 0.8 mile N of Sawi Village.
Anchorage can also be taken in similar depths just over 1 mile W of the observation spot. 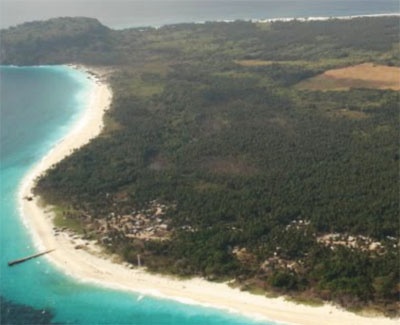 49nm
159°
Chowra Island, which lies about 24 miles SSE of Batti Malv Island, is generally low but rises to a 104.5m high rocky pinnacle at its S end.
The island looks like a hat from the offing. Sanenya, the principal village, lies on the NE coast.
It has area of 8.2 sq km with a population ...
28 Nov 11
Jojo

24nm
167°
Batti Malv Island (or Kuono), which lies about 17 miles SSE of Car Nicobar, appears wedge-shaped from the offing. It's an uninhabited island that covers an area of 2 square kilometers. This very small island rises to a densely wooded peak about 73m high. The NW end of the island is ...
28 Nov 11
Jojo

65nm
154°
Bompoka island lies about 1,8 NM east from southern end of nearby Teressa Island in the Nicobar group of islands. The hills on the island rise upto 193 m. The island has dense forest and some portions have grass growth. There is thick coconut palm growth on shores all round ...
29 Nov 11
Jojo