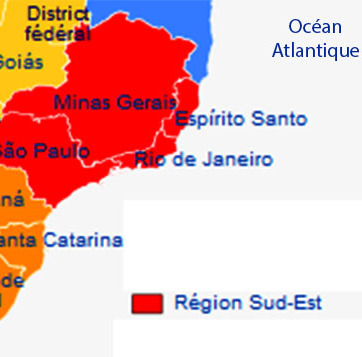 383nm
258°
Lying about 60 miles west of Rio de Janeiro, this large bay with the island of Ilha Grande in the middle, is one of the best cruising grounds in Brazil. It is full of remote anchorages and quiet, traditional fishing villages.

186nm
299°
Large harbor protected by a breakwater. It export iron. The Port of Tubarão was the largest iron ore embarking port in the world
17 Jan 16
capindak

188nm
298°
.Vitoria is a pleasant, modern city in the state of Espirito Santo, with a very busy port. Consequently, there tends to be quite a bit of noise from the industry across the bay. The Iate Clube de Espírito Santo is very welcoming to foreign cruisers.
It is a port of entry.
If ...
17 Jan 16
TrIpLeXzIbIt

192nm
307°
Port protected by a breakwater. It is the only port in Brazil that is specialized in shipping pulp.
Portocel is located in the Barra do Riacho district of the municipality of Aracruz, on the northern coast of the state of Espírito Santo, 30 nautical miles (70 Km) north of the ...
17 Jan 16
notetext