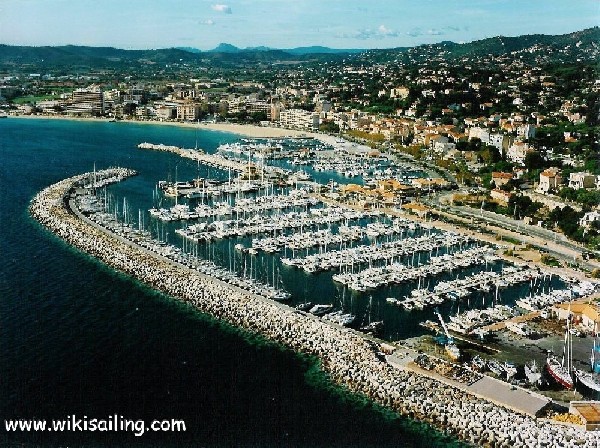 Le Lavandou  is protected by a jetty and a mole, and has depths of 1 to 4m.The original basin is used by small craft. Anchoring is prohibited within this basin on account of mooring chains lying on the bottom.
Quays at the W ends of the mole and the breakwater are reserved for the use of local ferries. An extensive yacht basin, protected by a curved breakwater, lies close SE of the original basin. Anchorage may be obtained, in depths of 15 to 20m, muddy sand, good holding ground, about 0.2 mile SE of the harbor. 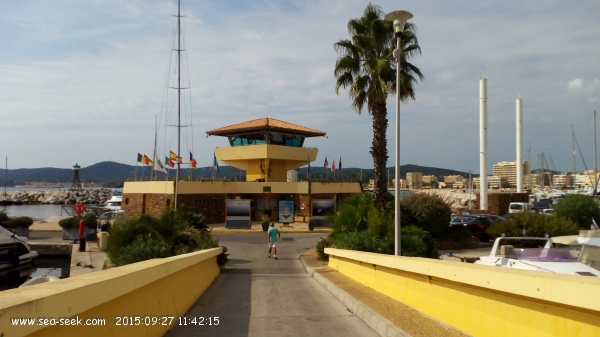 7.8nm
144°
Prohibited areas, the limits of which are shown on the chart, lie SW of Pointe du Titan (Ile du Levant) and extend up to 2 miles from the coast. These areas, which are used by French naval vessels, are not in force between July 1 and August 31.
Vessels are prohibited from approaching ...
10 Jul 11
Atb

18nm
264°
Toulon is a large military harbour on the Mediterranean coast, with a major French naval base.The prevailing winds are from the NW (Mistral) and W. These winds may reach a velocity of Force 11. Winds from the E and SE, which are less frequent, are generally accompanied by rain squalls, ...
1 May 12
Muntza

13nm
250°
Golfe de Giens is entered between Pointe de Carqueiranne and Pointe Escampobariou, 4.7 miles
SE. Pointe Escampobariou is the SW extremity of Presqu’ile de Giens, a peninsula, the W side of which is 118m high and surmounted by a tower.
The E side of this gulf is bordered by ...
30 Jul 13
Joëlle

7.9nm
173°
Ile de Port Cros, lies close E of Ile de Bagaud, is mainly wooded and is the highest island of the chain. Its summit, 207m high, is surmounted by a building, with two white cupolas, which are visible from a considerable distance.
An islet, 63m high, lie 0.2 mile S of the S extremity ...
24 Mar 12
Max

0.7nm
201°
This marina is located NW in one of the most attractive bays on the coast opposite the islands, between cap Benat and cap Negre.
The main sea wall goes round the peninsula, the position of the jetty and the break-water providing good shelter. 950B. incl. 80 visit.
24 Mar 12
dd