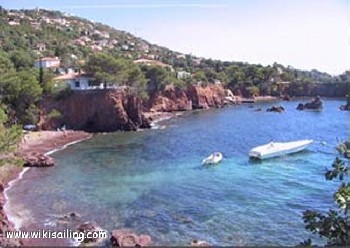 8.2nm
44°
Cannes bay is located between Pointe de l'Aiguille and Cap de la Croisette, 4 miles ENE, from which the islands "Les Îles de Lerins"  extends up to 2 miles. The E side of the gulf is occupied by the town and port of Cannes well known by it's film festival, where the houses form ...
4 Jul 12
Atx

11nm
50°
Golfe Juan is entered between Cap de la Croisette and Point de l'Ilette, 3.8 miles ENE. This gulf is sheltered from the SW by Iles de Lerins and from the S by shoals and is one of the best roadsteads along this part of the coast. In the approaches to the gulf, the currents are weak ...
17 Jul 11
Atoi

0.6nm
93°
Pointe des Vieilles   is located 1 mileENE of Pointe de la Baumette. Numerous villas are scattered along the coast between these two points and a prominent hotel stands on Pointe des Vieilles. A conspicuous viaduct, clearly visible from seaward, is situated 0.5 mile N of the ...
17 Jul 11
Atoi

0.7nm
286°
Rade d’Agay  is entered between Cap de Dramont and Pointe de la Baumette, 1 mile NE, and has a sandy beach at its head. Mornes Rouges d’Agay, 213 to 288m high, is a range of reddish hills which stand 0.5 mile inland at the head of the bay.

0.8nm
52°
A conspicuous viaduct is situated at Trayas, a village, 0.7 mile N of the cape Roux. A remarkable square rock stands in the center of another saddle, close above this village.
17 Jul 11
Atoi