Ko Lanta Yai and Ko Lanta Noi are islands of Lanta archipelago, in S Thaïland, in the Andaman sea.
They are separated from the S side of Ko Klang by a narrow shallow channel.

From seaward these islands appear as one.

The N part of Ko Lanta Yai is mostly flat and low-lying with several isolated hills. The S part consists of a narrow ridge of steep hills which attain an elevation of 491m.

Ko Lanta Yai is a long thin island running north through south, 6 kilometers wide and 40 kilometers long. The west coast (or sunset coast) faces the Andaman Sea with a string of beautiful white-sand beaches that hosts the island’s resorts.
The National Park office is located at the southern end of the island, and is a fantastic area for bird watching and nature trekking.

The Ko Lanta archipelago covers an area of over 180square kilometers and includes a total of 52 islands. It was declared as Thailand’s National Park No.62 in 1990, in an offer to protect the fragile coastal environment.

The archipelago consists of for small group of islands, mainly known as the Ko Ngai (Hai) group, the Ko Rok group, the Ko Ha group, and the Ko Lanta group.

80% of the archipelago is in the sea, and is protected under the Marine Park authority, ensuring underwater lives and the reefs within remain fresh and unspoiled. Diving and snorkeling within the area offers characteristics unique to these sites alone.

In the channel E of Ko Lanta Yai, the tidal currents set N and S at a rate of 1 knot to 1.5 knots.

Weather on Ko Lanta is typically that of a tropical monsoonclimate. The monsoons change direction twice a year. Coming  once from the south-west and once from the north-east. This causes Ko Lanta to have only 2 seasons-  summer season and rainy season. The tourist season in Ko Lanta runs from October through until May with most visitors arriving from November to March.

The South-West monsoons brings  rain to the island during low season. Ko Lanta’s mountain range blocks some rain and aids jungle regrowth on the west side, as well as filling up the reservoirs. 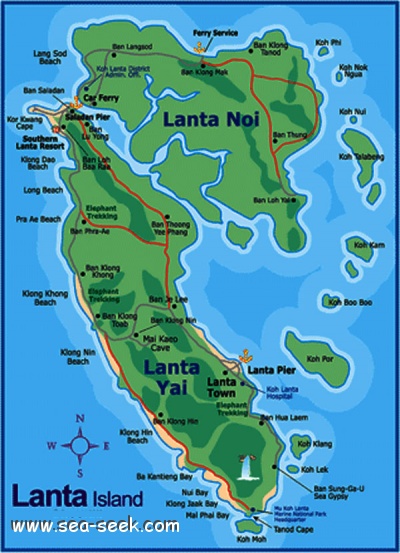 61nm
172°
Big desert island, with a significant advantage over its cousins​​, that of having fresh water, Ko Rawi is located N of Ko Butang, E of Ko Adang. Its SE coast is populated with coral reefs and tropical fish.

43nm
289°
Small bay at the very NE end of the main bay which gave good access to Phuket Town but got caught low tide which exposes the fringing reef for the first 100 meters from the shore.
Picking the right tide makes this an excellent anchorage with constant bus services to Phuket ...
23 Nov 11
Jojo

45nm
288°
This is Phuket's principal boat anchorage and the island's largest bay, 11 kilometres south of the town.
It is very picturesque but not suitable for swimming.
Boats can be chartered to go to some small island south of Phuket.
The best anchorage is on the north end of ...
23 Nov 11
Jojo

47nm
284°
A nice protected anchorage and the location of the Phuket Yacht Club/Meridian Hotel.
There actually is no yacht club just the Meridian high-class expensive resort.
The bay is quite isolated from the central tourist areas and transport to and from can be a problem, particularly ...
22 Nov 11
Jojo