Hawaii is one of the most isolated group of islands in the world. It's a long way to Hawaii from mainland USA with nothing but open sea between. Winter storms can bring about rough seas and cyclones are a threat in late summer.
Fully serviced marinas are at Honolulu and KoOlina on Oahu, Lihue on Kauai, Honokohau (Kailua) on the Big Island and Lahaina on Maui. Hanalai Bay and Poipu on Kauai are also popular berthing spots.

Renting small hoby cats is more practical and can be done at most major resorts around the islands.

The climate is subtropical in the low coastal areas and temperate in the mountains. There is no rainy season but showers, sometimes downpours, occur in winter. The islands are under the influence of the NE trade winds and are only rarely affected by tropical cyclones.

The Department of Land and Natural Ressources (DLNR) has established rules that all boaters in Hawaiian islands must follow.

The first rule to remember is that you can anchor in any anchorage for 72 hours without checking in. The one exception is that you must check in immediatly whenever you enter a harbor with a harbormaster on site, such as Ala Wai, Ke'echi, Wai'anae, Hale'Iwa, He'ela Kea, Kaunakakai, Hilo, Honokôhau, Lahaina, Ma'alaea, Mânele, Kahului, or Port Allen.
After the first 72 hours is up, boaters are required to move to another anchorage or even to another part of the same anchorage.

The exceptions to this right to anchor in any anchorage for 72 hours are the areas that are part of Marine Conservation District or Natural Area. All or part of some bays have been placed in Conservation District because the heavy traffic and the delicate ecosystem on the bottom of the bay required intervention on the part of the State of Hawaii.

Boaters may not anchor in part or all of the following bays:

When boaters visit small boat harbors in Hawaii, they must obtain a permit from the harbormaster and pay a daily fee, as is the case in harbors anywhere. The difference here is that the facilities are not the plush ones some boaters might be accustomed to elsewhere. Although some might complain about the facilities, the low daily rate charged to visiting boaters more than makes up for any shortage in facilities. 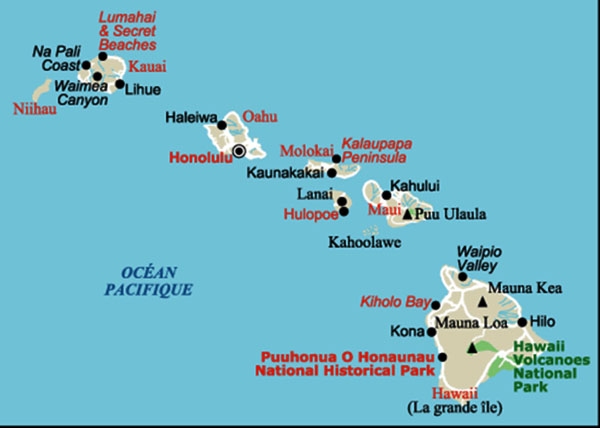 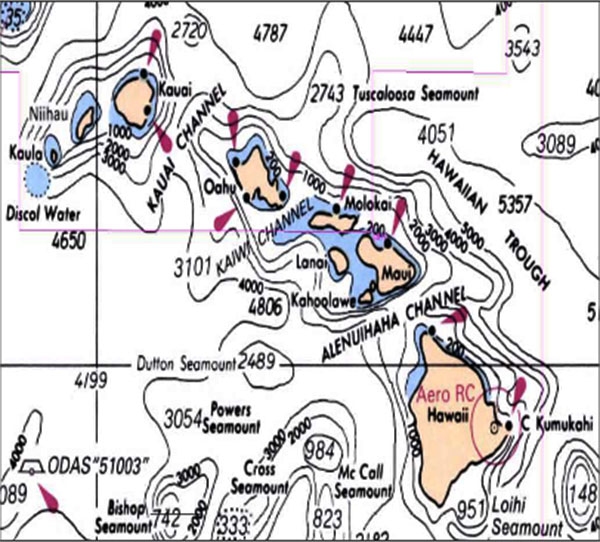 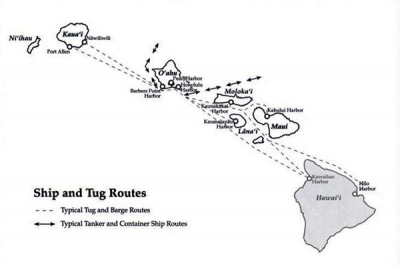 131nm
122°
Hawaii is the largest island and the southeastern-most of hawaiian archipelago in the N pacific ocean.
Major commercial ports are Hilo on the East side and Kawaihae on the West side of the island. Cruise ships often stop at Kailua-Kona.
14 Dec 15
Joëlle

59nm
86°
Maui, also known as the" Valley isle", for the large isthmus between its northwestern and southeastern volcanoes and the numerous large valleys carved into both mountains.

52nm
325°
Oahu, known as "The Gathering Place", is the third largest of the hawaiian islands, however, it is home to about two-third of the population of the US state of Hawaii, and is the home of Honolulu international airport.The state capital, Honolulu, is on Oahu's southeast coast. Including ...
6 Dec 15
Joëlle

142nm
303°
Kauai is the oldest of the Hawaiian Island chain, and has some of the most unique geographical, natural beauty of any island on earth.
Aside from the being the wettest place on earth - with an average annual rainfall of 440 inches (over 36.5 feet) - the 553 square mile island ...
4 Dec 15
Joëlle

26nm
79°
Lanai island, also known as "Pineapple island" because of its past as an island-wide pineapple plantation.
The island's only settlement of note is the small town of Lānaʻi City.
As of 2012, the island was 98% owned by Larry Ellison (Founder and Chairman of Oracle), with the ...
11 Dec 15
Joëlle