Fujayrah is one of the seven emirates that make up the United Arab Emirates, and the only one on the Gulf of Oman in the country's east instead of Persian Gulf (the other six emirates).

The Emirate of Fujairah covers approximately about 1.4% of the area of the UAE. Fujairah is the only Emirate of the UAE that is almost totally mountainous. 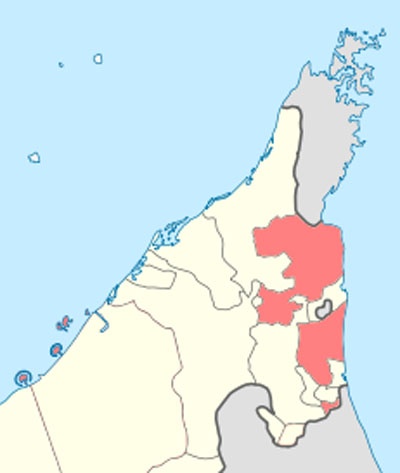 4.3nm
49°
Khor Fakkan (or Khawr Fakkan) is a town located along the Gulf of Oman on the east coast of the United Arab Emirates (UAE). The town is set on the picturesque bay of Khor Fakkan, which means "Creek of Two Jaws".
Khor Fakkan belongs to the emirate of Sharjah but is geographically ...
14 Oct 11

8.3nm
159°
Port of Fujairah (or Fujayrah) is the only multi-purpose port on the Eastern seaboard of the United Arab Emirates, approximatly 70 natuticak miles from the Straits of Hormuz.
Initial Construction of the Port started in 1978 as part of the economic development of the UAE. Full ...
16 Oct 11
Joëlle

36nm
311°
Al Jazira port fronts Jazirat al Hamra, which was once an island but is now part of the mainland.
The port exports rock and aggregates from nearby quarries but can also handle bulk, liquid, ro-ro, container, and general cargo.Tides—Currents.—The mean maximum ...
10 Oct 11
Joëlle

58nm
272°
The Palm Deira is an artificial archipelago under construction, located alongside Deira town.The largest of the three Palm Islands, Palm Deira on completion will cover an area greater than the city of Paris. Featuring 8,000 two-storey houses, villas, and town homes, it is a ...
15 Oct 11
Joëlle