About 2 NM WNW of ensenada do Abraao, ensenada da Estrela offers anchorage in all parts of the bay, but the swelle sometimes runs into it.
2016/01/18
Update
Joëlle 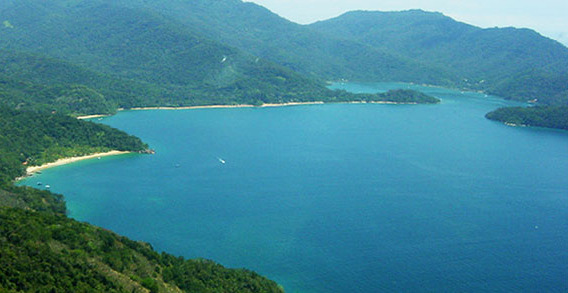 11nm
39°
Baia de Mangaratiba is entered between Ponta do Bispo and Ponta da Cruz. This shallow bay is exposed to the sea, which breaks heavily on its NW shore. The town of Mangaratiba stands on the E side of the bay and has a small concrete pier.
Laje de Mangaratiba, low, dark-colored, ...
18 Jan 16
Joëlle

0.7nm
313°
Saco do Ceu, a landlocked cove, lies in the NW corner of the enseada da Estrela bay.

2nm
117°
Enseada do Abraao lies about 2 NM NW of ensenada das Palmas. On the W shore of the bay are the large buildings of a disused quarantine station and a small landing pier.

4.3nm
77°
Ilha Pau a Pino is located about 3 miles N of Enseada das Palmas and rises sheer from the sea. The island has little vegetation, but shows a light. A rocky ledge extends about 0.2 mile SW from the island.
18 Jan 16
Joëlle

5.1nm
259°
Enseada de Sitio Forte is entered between Ponta Grossa de Sitio Forte, about 2 miles NE of Ilha Longa, and Ponta Aripeba, about 1 mile farther E. The head of the bay is formed by a small cove, the W side of which is foul.