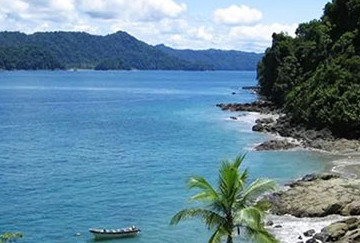 National park with a park fee and anchoring fee.
There is a small military force stationed here to watch the coast.
The bay offer a very good protection.
2016/01/8
Update
Joëlle
Share your comments or photos on "Ensenada Utria (Colombia Pacific Coast)"

14nm
346°
Approching, keep more than 2 NM off Punta Solano because of off lying rocks.

41nm
348°
Just North of bahia Solano is bahia Cupica.
When approching be very carefull of punta Cupica. Rocks can be found as far as two miles of the land.
Bay open to the S, si it is best visited during the dry season or when the winds are coming from the North.
8 Jan 16
Joëlle

128nm
172°
This port is located at about the midway point in Colombia's Pacific coast. It has the reputaion of being one of the most violent cities in the country.
It's a port of entry.

212nm
321°
Taboga island, also known as the "Island of Flowers", is a volcanic island in the Gulf of Panama, about 20 km from Panama city.At low tide, the northern end of the island is joined by a sand bar to the small island of El Morro, and the southeastern end is 270 meters from the neighboring ...
21 Dec 15
Joëlle

213nm
321°
Located 6 miles S of La Playita.
There are moorings for rent on both sides of the long touristic pontoon.
At low tide and during the week the beach is wide and nice, but at high tide it becomes small and dirty, especially on Saturday and Sunday, when hundreds of local tourists ...
27 Dec 15
Joëlle