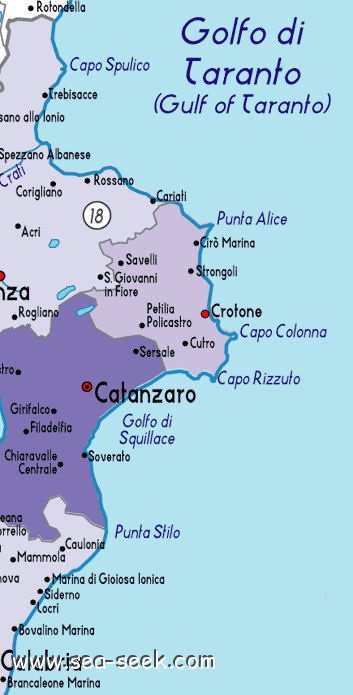 Bordered by the Ionian Sea, the eastern coast of Calabria includes two gulfs, the Gulf of Squillace and the Gulf of Taranto.
The capital of eastern Calabria is Catanzaro.
Between Cape Spartivento and Cap Colonne (71 M approximately), the coast is little cut. In the NE part, lies the gulf of Squillace, very open. Then, the coast forms the Gulf of Tarento, which sinks towards the NE over a distance of 75 M.
The mountain range Appenino Calabrese (Appenin of Calabria) extends not far from the shore between Cape Spartivento and Cap Colonne. The main peaks are the Aspromonte, the Montalto (1956 m), 16 M at the NNW of Cape Spartivento and, in the Sila massif, the Boot Donato (1930 m), 39 m at the WNW of Capo Column. Appenino Calabrese then moves away from the W coast of the Gulf of Taranto to connect with the mountain range that rises in the Basilicata (Lucania).
The coast is generally sound, except in the SE part of the Gulf of Taranto, where the only dangers which are near the coast are found.
The only major port is Taranto (Taranto), at the N end of the Gulf.
WEATHER
In autumn and winter the prevailing winds are those of the sector N (Tramontane) to SE (Sirocco).
The winds of the S and SE are violent but lasts less than those of the N. They raise a large sea and make dangerous moorings, generally exposed to such winds.
In addition, NW gusts, called "Tarantate", are frequent and violent in the Gulf of Taranto. They are announced by large clouds furrowed with lightning stretches on the horizon.
CURRENT:
A current carrying S and rarely reaching 1 knot usually runs along the W coast of the Gulf of Taranto. S winds influence its direction. The current may rise to N if these winds are cool and persistent or before strong SE winds.
On the E coast of the Gulf, the currents are strongly influenced by winds, especially those of the S. A current carrying NW announces strong winds from this direction.
2017/09/9
Update
Joëlle