Pulau Tuba (5 km S of Langkawi) is the only inhabited island besides the main island of Langkawi itself. This Langkawi island gets its name from the tuba roots. It is the only other island that offers accommodation and there are a few places to stay.
At Pulau Tuba, you can experience traditional fishing village life with fishermen returning home in the evenings in their quaint fishing boats.

Anchor well out in the bay in 4-6 metres. At low tide, enter by dinghy to the long jetty and tie to a fishing boat to avoid the sharp barnacles.

At the Malay fishing village there are basic restaurants ashore. 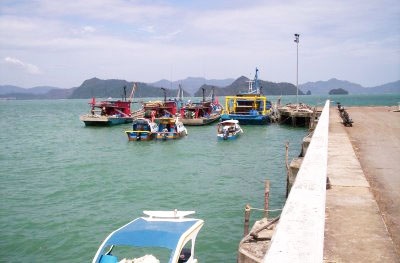 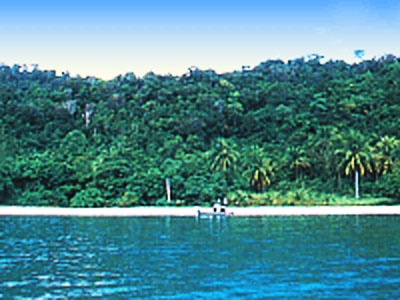 5.6nm
44°
Located E coast of Malaysia.It's the most easterly anchorage for Langkawi. Being surrounded by a cluster of islands adds to the calm conditions  in most winds, but being close to the open sea, sometimes there's a
bit of ground swell to contend with. The water is clean ...
27 Nov 11
Jojo

6.7nm
250°
Pulau Singa Besar is located about 17km from Kuah, nestled between the smaller island of Pulau Beras Basah to the west and Pulau Dayang Bunting to the east. The sedimentary rocks on this island are reputed to be among the oldest in Malaysia going back 500 million years.This island ...
27 Nov 11
Jojo

2.8nm
30°
Pulau Bumbon Besar and Pulau Bumbon Kechil are located less than 3 NM from Kuah, on the SE from Pulau Langkawi.
Pulau Bumbon Besar has the shape of the letter M, with two coves on the southern part.
The island is uninhabited and rarely visited.
It is separated from another ...
26 Nov 11
Jojo

3.1nm
299°
Monkey beach or Teluk Duyung is Only 5nm from Kuah Town, so makes a handy day spot  to anchor before moving to either Singa Besar or the "Fjords" for a  more comfortable night anchorage by 3/4 m. It is protected by the Muka Head Cape. It is a private land, at one time ...
27 Nov 11
Jojo