The Gulf of Oman is a western extension of the Arabian Sea, positioned in the Middle East between Iran, Oman and the United Arab Emirates. It's the entrance to the Persian Gulf from the Arabian Sea and Indian Ocean,
2007/12/23
Aggiornare
Condividi i tuoi commenti o le foto su "Gulf of Oman"

Siti intorno a Gulf of Oman 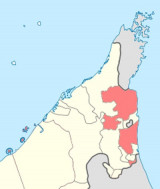 158nm
299°
Fujayrah is one of the seven emirates that make up the United Arab Emirates, and the only one on the Gulf of Oman in the country's east instead of Persian Gulf (the other six emirates).The Emirate of Fujairah covers approximately about 1.4% of the area of the UAE. Fujairah ...
16 Oct 11
Joëlle