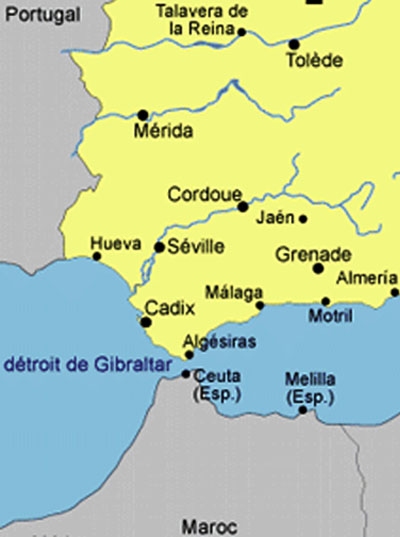 The Alboran Sea is the westernmost part of the Mediterranean Sea. It's positioned between the continents of Africa and Europe, and the countries of Morocco and Spain. It takes its name from the island of Alborán, located halfway between the cities of Almeria and Melilla (Spanish enclaves on Moroccan soil)

The Strait of Gibraltar, approximately 9 miles (14 km) wide at its narrowest point, is the entry point into the (Alboran Sea) and Mediterranean Sea from the Atlantic Ocean.

Spain's autonomous small cities of Ceuta and Melilla, plus the three small islands of Islas Chafarinas, Penon de Alhucemas, and Penon de Velez de la Gomera, administered directly by the Spanish central government, are all located along the coast of Morocco.