Gulf of Patras - Gulf of Corinth

The Gulf of Patras (in Greek: Patraikós Kolpos) is a branch of the Ionian Sea. To the east, it is closed by the Strait of Rion, between the capes of Rio, Greece and Antirio.
At the W, it is bounded by a line from Oxeia Island and Cape Araxos. It is 40-50 km long, 10-20 km wide, and has an area of ​​350-400 km ².
The port of Patras in the south-east, is the only major port on the gulf (2nd in Greece). It serves ferries to Ancona and Brindisi in Italy with Cephalonia.
Messolonghi also has a port. There are beaches in the south, east and in some parts of the north.
The ditch is rich in fish.
The city of Patras is a city in Greece, located north of the peninsula of Peloponnese. With 169,242 inhabitants in 2001, it is the third largest city in the country and also the most populated peninsula.
Capital of the region of West Greece, it is also chief town of the nome of Achaea.
The city is an ancient bishopric of the Church. Patras claims the honor of having been the first city to rise up during the Greek War of Independence thanks to its Archbishop Germanos, March 25, 1821.
The Gulf of Corinth is a portion of the sea separating the Peloponnese from the western mainland Greece. It ends to the east by the Isthmus of Corinth, and to the west by the Straits of Corinth, above which the Rion-Antirion Bridge was built. the Gulf is the result of a rift (collapse pit) between two tectonic plates, at the center of a fault system with significant alpine seismic activity.
Inland sea between 2 continents (Peloponnese and Western Greece): the Gulf is locked and unlocked at each end by 2 of the cyclopean works of art: the Corinth Canal (1882-93), man-made, and the bridge Charilaos Trikoupis (2004), the longest suspension bridge in the world (3 km), can withstand the shock of a tanker of 180,000 tons.
2017/09/9
Mettre à jour
Joëlle
lepante
2013/11/7
Mettre à jour
Partagez vos remarques ou photos sur "Gulf of Patras - Gulf of Corinth"

53nm
280°
The Echinades (Echinae for Homer, informally: the Oxeiae (Sharp Islands)) are a group of islands located off the Greek coast of Arcania.These 25 small islands are, for the most part, made up of rocks. Some, however, are forested.
9 Sep 17
Joëlle 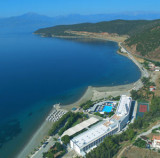