Apia harbour is the perfect setting for mariners with lovely views of the surrounding mountains and easy access to the capital's downtown district, although it offers little protection in strong winds. Downtown Apia sits overlooking the harbour and offers all yachting facilities as well as numerous restaurants and bars in the town. Unfortunately the close and shallow coral reef surrounding both Upolu and Savai'i keeps yachts from sailing around the islands - there are few passages, the best being at Fagaloa Bay on Upolu and the more popular yachting spots at Avao and Asau Bay on the north shore of Savai'i.
Apia is the only official entry point in Western Samoa (Pago Pago on neighbouring American Samoa has its own independent customs and clearance). Pull up alongside the wharf with your quarantine flag raised and wait for officials. You will need five copies of your crew list with proof of each passengers onward ticket or confirmation they will depart with the yacht, as well as certificate of clearance from your last port of call. There is a small daily fee for anchorage. Prior permission must be sought to visit other parts of Samoa which can be obtained from the Prime Ministers office in downtown Apia. If you plan to leave the country from Savai'i, check out with immigration in Apia before leaving for Savai'i.
Pago Pago, capital of neighbouring American Samoa, has a splendid deep water natural harbour which offers the best protection from strong winds of all south pacific islands. Pago Pago is also the cheapest place in the region to stock up on foods and essentials. Anchorage is free for seven days, after which a fee of US$15 or more must be paid.
2007/12/30
Actualizar 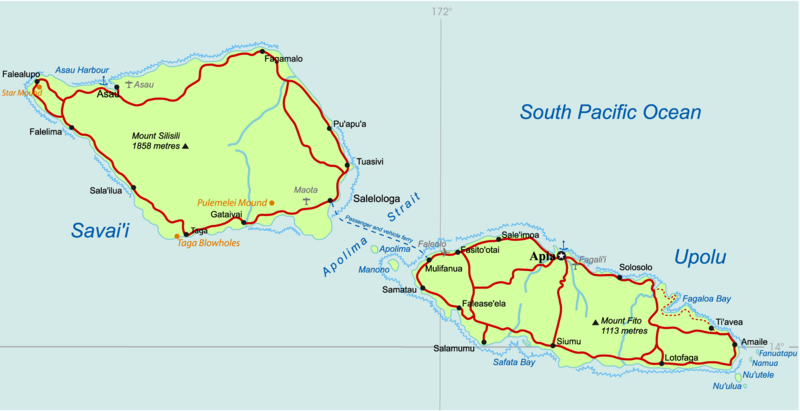