The Indian Ocean is the third largest of the world's oceanic divisions, covering about 20% of the Earth's water surface. It is bounded on the north by Asia (including the Indian subcontinent, after which it is named); on the west by Africa; on the east by Indochina, the Sunda Islands, and Australia; and on the south by the Southern Ocean (or, traditionally, by Antarctica). One component of the all-encompassing World Ocean, the Indian Ocean is delineated from the Atlantic Ocean by the 20° east meridian running south from Cape Agulhas, and from the Pacific by the 147° east meridian. The northernmost extent of the Indian Ocean is approximately 30° north latitude in the Persian Gulf and, thus, has asymmetric ocean circulation.

The Roaring Forties is a name given, especially by sailors, to the latitudes between 40°S and 50°S, so called because of the boisterous and prevailing westerly winds. Because there is less landmass to slow them down, the winds are especially strong in the Southern Hemisphere, notably in the South Indian Ocean. 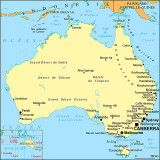 2376nm
329°
Arabian Sea
The Arabian Sea is a northwestern extension of the Indian Ocean, positioned between India, Oman, Pakistan and Yemen, and Cape Guardafui in far northeastern Somalia. The sea connects with the Persian Gulf through the Gulf of Oman and the Strait of Hormuz. In the southwest, ...
23 Dec 07 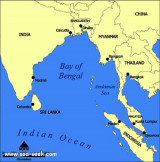 1767nm
5°
The Bay of Bengal (largest bay in the world,) forms the northeastern part of the Indian Ocean. It is bordered mostly by the Eastern Coast of India, southern coast of Bangladesh and Sri Lanka to the west and Burma (Myanmar) and the Andaman and Nicobar Islands (part of India) to the ...
20 Nov 11
Jojo