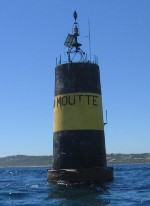 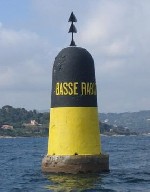 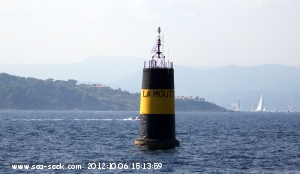 Cap de Saint-Tropez, the E extremity of a peninsula, is bordered E and NE by foul ground.
Basse du Verhuge lies about 2 miles ESE of the cape and has a depth of 13.7m. This shoal is dangerous in bad weather when the sea breaks violently over it.
Teste-de-Can, a group of three above-water rocks, lies 0.5 mile SE of the cape and is prominent. A rocky ledge extends up to about 1 mile NE of the cape and its seaward edge is marked by a lighted beacon. Basse du Nord-Est, a detached rocky patch, lies close ENE of the lighted beacon and has a least depth of 4m.
Le Saint Julien, a bank, lies 4 miles E of the cape and has depths of 53 to 70m.
Pointe de la Rabiou is located 1.2 miles NW of Cap de Saint-Tropez. The coast between is 30 to 60m high and prominent. A rocky ledge extends about 0.3 mile N from a point on the coast, 0.5 mile SE of Pointe de la Rabiou. It has depths of less than 5m, is awash at the seaward extremity, and is marked by a beacon.
A rocky shoal, with a least depth of 6.2m, lies about 0.5 mile N of Point de Rabiou and is marked by a beacon.
2011/07/16
Actualizar
Agien
Comparta sus comentarios o fotos en "Cap de St-Tropez"