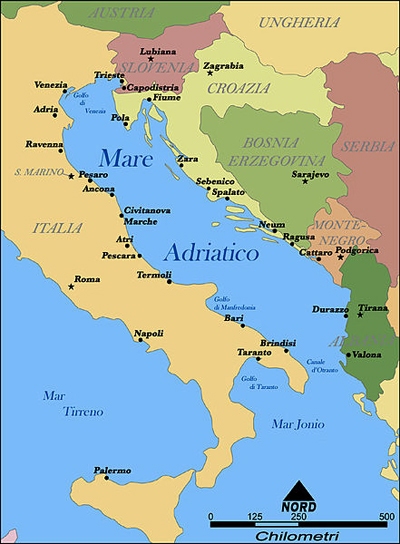 The Adriatic Sea is a body of water separating the Italian Peninsula from the Balkan peninsula, and is a part of the Mediterranean Sea. The western coast is Italian, while the eastern coast runs mostly along Croatia, but lesser parts belong to Slovenia, Bosnia and Herzegovina, Montenegro, and Albania.

Traditionally  its southern end is at the "Strait of Otranto", where the shores of Apulia and Albania are the closest.

The island of Corfu is generally regarded as the key strategy of this sea where many major ports are located, including Venice (Mestre) and Trieste, which was long the outlet of the Austro-Hungarian Empire to the Mediterranean Sea.

The tidal range is very low (about 30 cm towards the S and not more than 90 cm at the N) which has, since ancient times, the creation, along the low N side, cities such as Aquileia, Chioggia, Grado, Venice, world famous for the high water phenomenon that periodically are increased by a few feet in many places including Ravenna. 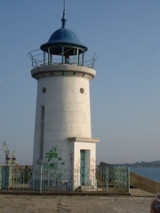